As a native New Yorker, owner and designer Kris Lynch was surrounded by high fashion designs from an early age through her mother, a 7th Avenue couture fashion designer. After graduating from the School of Visual Arts, Kris accepted a position with Pressman Toys, the second largest game company at the time. Throughout her 16 year career within the toy industry, Kris aligned herself with renowned toy companies such as Toy Biz, where she managed the $87 million worldwide girl's division and launched the number one girl's doll line for 3 consecutive years. She later moved to California to join the number one company in the industry, Mattel Toys, which afforded her the opportunity to work with such partners as MIT and 3M.

Returning to New York to start a company manufacturing upscale dog collars, leashes & toys, Kris learned that the recipe for a product's success was to offer strong value through unique designs at affordable prices. After 3 years in business, one customer continued to rank in the top 20 in sales, yet only carried 2 sizes of collars and refused to carry the best-selling puppy toys in the line. Finally, Kris asked why they wouldn't pick up any other sizes, she was informed that they were an adult shop and her eyes were opened to a new industry. After much enjoyable product research, she took her drive for pushing the envelope in design and wanted to raise the bar of excitement in a different industry by adding chic fashion and style to what was then a heavy, black fetish BDSM category. With each product she designs, Kris tries to empower the woman to feel sensual, sexy, and pretty in a non-intimidating atmosphere... thus allowing her to be relaxed and open to new experiences.

Kris now offers "toys" for "big girls" and launched under her company name: RUFF doggie styles, where it's all about HER. 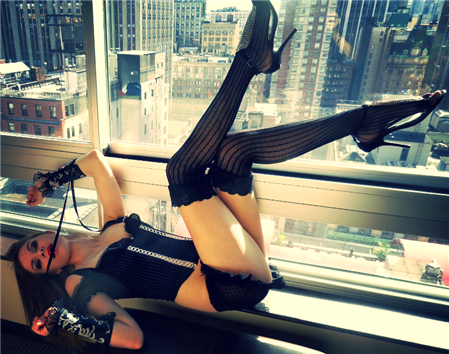